From The Yambo Project
Jump to navigation Jump to search

Basic concepts of the GW approximation 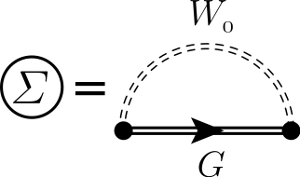 In this tutorial you will learn the basic concepts of the Hartree-Fock and of the GW[1] approximation. In particular we will illustrate how to calculate Quasi-Particle energies with a single shot G0W0 approximation. Different lecture notes on the GW approach are available in the Lectures section.

The tutorial is split in different sections. In the first part we will deal with Hartree-Fock (HF) and the Coulomb-hole and screened-exchange (COHSEX) approximation. Finally in the last section we will discuss dynamical correlation with a Plasmon Pole Approximation (PPA).

with the Solid_Si folder containing

In the Pwscf folder the student will find an input/output directory with input/output files for pw.x. The Silicon pseudopotential file is also provided.

In the convergence_scripts you will find some useful shell scripts to run the ground state convergence runs for Silicon.

The core databases are provided for several k-points grids. In addition the folder Convergence_Plots_and_Scripts contains some scripts to extract informations from the report files useful for the tutorial.

Now we will study the convergence of the Hartree-Fock self energy, respect to the number of G-vectors and k-points. Yambo is a plane-wave code, therefore all the operators and wave-functions are expanded as:

Before you start any calculations we can decide how many G-vectors you want use to represent your wave-function. By default Yambo will use all of them, and for the present tutorial this is fine, however if you are studying larger systems you would like to reduce them in order to speed-up calculations, you can do it with yambo -i -V RL and then changing the variable MaxGvecs that referees to Ng in the previous formula.

Now we will proceed in the calculation of the Hartree-Fock exchange. This is composed of two terms, that Hartree and the Fock (or exchange) one:

In this tutorial we will calculate only the first order correction to the Kohn-Sham Hamiltonian due to the exchange term. Because of we are working in periodic system, the most appropriate basis to represent the Coulomb potential, appearing in the Fock term, is a plane-wave basis:

In order to generate the input file for the exchange type yambo -x. The variable that governs the number of G vectors Nex in the Coulomb potential is EXXRLvcs. In addition notice that in the previous formula for V(r-r') we have an integral on the q vector, that in the code is discretized on a regular q-grid generated from the k-point one, q=k-k'.

Now edit the 01HF_corrections file changing the field EXXRLvcs=3,6,7 and 15 Ry. For each case run

Now plot the HF corrections by using the hf_vs_cutoff.gnuplot script. Launch it via 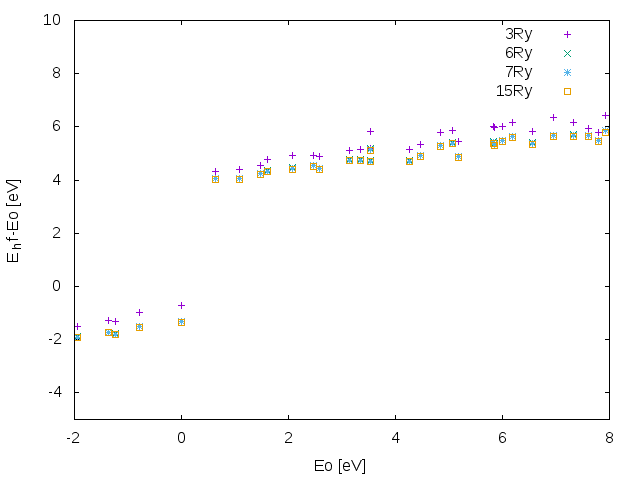 without options. Then type

and edit the 01HF_corrections file

Then run in each k-point folder

Note that after each run Yambo produces three output file, one starting with r_... , another with l_... and a third one starting with o_.... The first one is a report of the actual calculation with all the details of the system, input, and results, while the second is a log with the running time of each process.

The file we are most interested in is the output file, o-01HF_corrections.hf. This file contains several columns. The fourth, labelled with Ehf represents the Hartree-Fock energy. This is the quantity we have to look at.

Use the parse_gap_hf.sh to parse the output files and adapt the gnuplot script provided earlier to print the values by using gnuplot 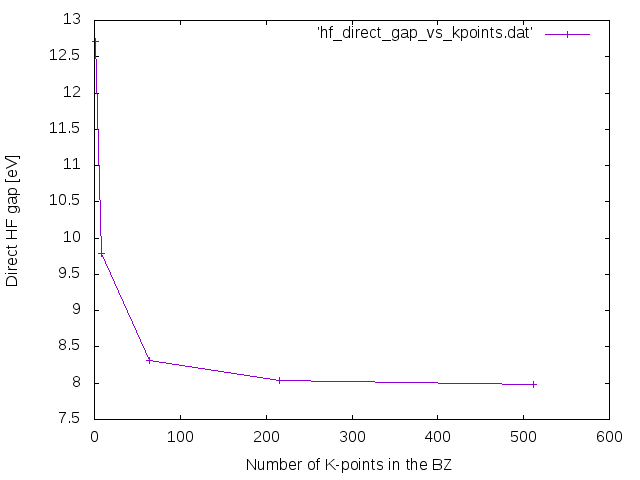 The Hartree-Fock self-energy just described in the previous section, although successful on some molecular systems, miserably fails in extended systems. The reason of this failure lies in the fact that electrons can screen the Coulomb potential, and therefore one electron feels a screened potential instead of the bare one. A common approximation for this screened potential is the so-called Random Phase Approximation:

where the bare Coulomb potential V(r) is replaced by a non-local and frequency dependent one W(r,r',ω). Subsequently it is possible to redefine all the perturbation theory in term of this screened potential, and disregarding the additional corrections coming from the vertex part, one obtains the so-called GW approximation.

However the substantial complexity associated with calculating the non-local, energy dependent Σ=GW operator inspired early efforts to find simplifying approximations as the static COHSEX approximation prosed by Hedin[2]. The Coulomb Hole plus Screened Exchange (COHSEX) approximation[[[#march|2]],3] eliminates the summation over empty states for the self energy operator and has the added benefit of being a static operator, a particular simplification for self consistent calculations. With the COHSEX approximation the self-energy is composed of two parts:

In order to calculate the COHSEX self-energy with yambo you need first the static screened interaction yambo -X s -k hartree. As for the V(r) case, also W(r,r',E=0) will depend from the number of G-vectors, and the k-grid, but this time also the number of conduction bands BndsRnXs will enter in the screening calculation through the polarization function, see The Interacting response function: Many-Body and TDDFT section. Notice however that there are not any additional dependence of the self-energy operator from the conduction bands. After you obtained the screened interaction you are ready to build the self-energy operator and solve the corresponding Dyson equation, have a look to the Dyson Equation solvers in Yambo. In order to get the quasi-particle energies, just do yambo -X s -g n -k hartree. After calculation are completed Yambo will produce an output file o.qp which contains the values of the bare and re-normalized energy levels.

Follow the same strategy of the HF case. Enter each k-point folder and type

edit the input file and change the values of the fields

leaving the other parameters unchanged. Now, in each k-point folder, run 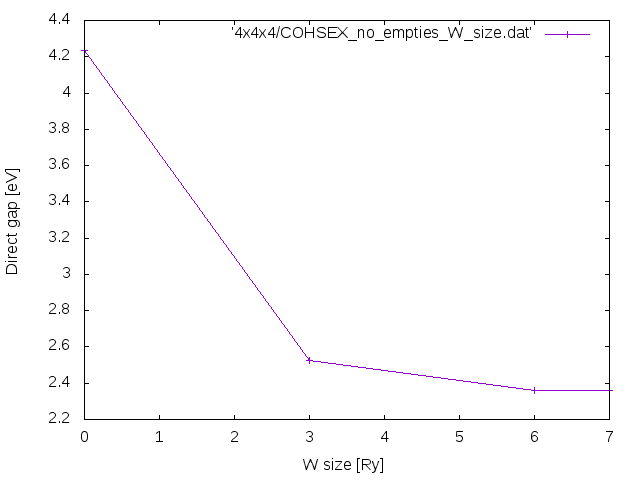 Open your input file and change only the input variable NGsBlkXs=1 Ry. Then change

and run yambo -F Inputs/02Cohsex -J Cohsex_HF7Ry_X1Ry-nb20. Repeat the calculations using 30 and 40 bands changing nb??? in the job string identifier. Finally check how the Chosex Direct and Indirect band gap behave as a function of the number of bands in the screening. 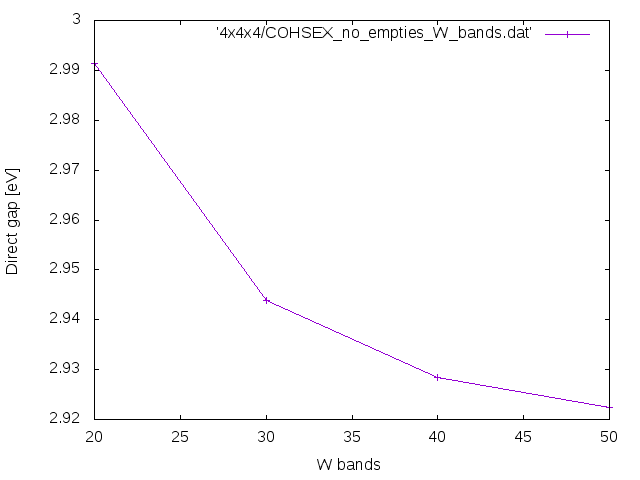 While the Screened Exchange(SEX) part of the COHSEX self-energy has a structure similar to the Hartree-Fock exchange term, the Coulomb Hole(COH) acts as static external potential on the electrons. In the COH part the delta function δ(r-r') comes from the completeness relation:

Now we avoid the use of this relation in such a way to have a self-energy that depends from the conduction bands too. This can be done uncommenting flags UseEbands and setting the number of bands in the Green's function:

Repeat the previous calculations with different GbndRnge for instance, 10 20 30 40, and check how the COHSEX direct and indirect band gap behave as a function of the number of bands in the Green's function. 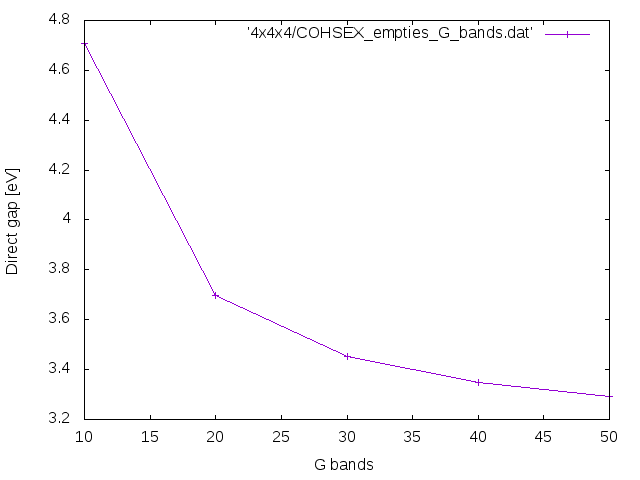 Even the static COHSEX approximation is very appealing, it was clear from the first calculation that dynamical effects cannot be disregarded in solids. This fact motivated the research for approximated way to deal with a frequency dependent interaction, and one of the first proposal was the so-called Plasmon-Pole Approximation (PPA).

Now we will proceed to the calculation of the silicon band gap in G0W0 within PPA. In each section you will be asked to perform several calculations varying the value of the relevant variables involved. More specifically let's consider a typical Yambo input file to calculate GW corrections in the PPA.

The final convergence plots should look like these (the plots are done using as a basis the above code). 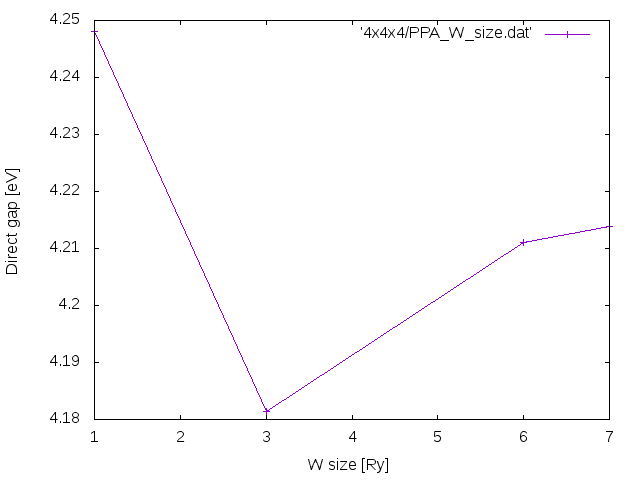 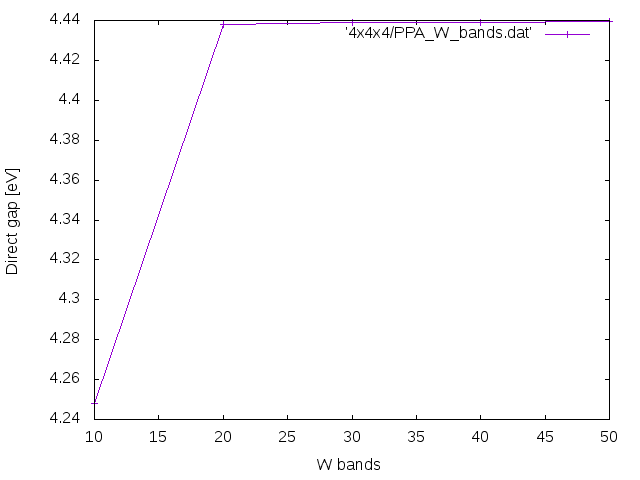 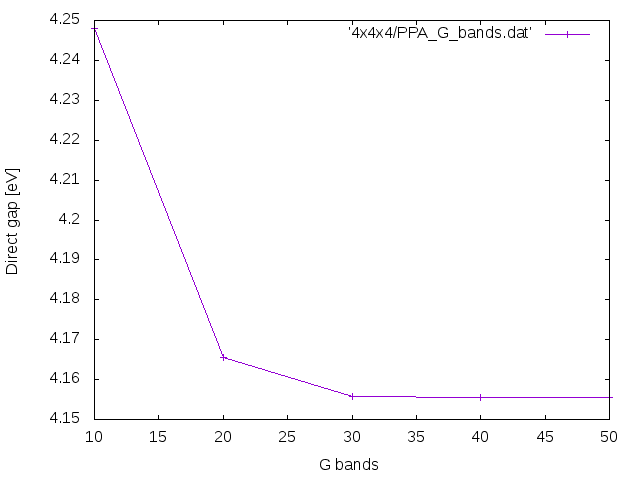 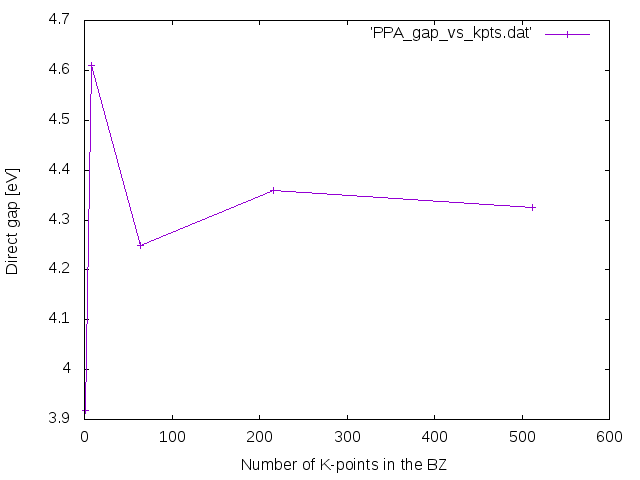 Final runs!! Now you know how to converge a G0W0 calculation so you can decide which are the parameters needed for full convergence. First do a COHSEX and then a GoWo (PPA) run at convergence, and you should obtain results similar to the following graph: 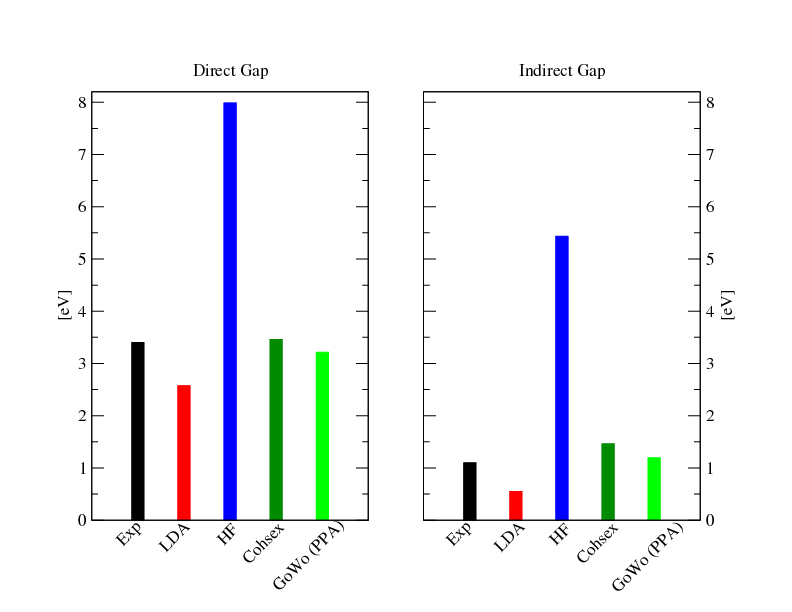